The first bad news is four flat tires in five days. I don’t know what the odds could be for such a set of events, but they are probably more than winning the lightning or winning the lottery. Neither of which I’ve done and only one of which I’d wish on myself.

The first two were the left front deflated with a small finishing nail.

The second was the spare. Partially inflated but not enough to support driving to the garage to have the first repaired.

The good news is that both flats happened in my garage making all aspects less dangerous and the problems more easily solved than being on a roadway with no spare.

Soon repaired, we were on the road for a day’s worth of travel.

Next morning. Same left front tire. Flat. Again in the garage. Spare is properly inflated so the soon repaired tire now has two plugs, the second puncture from a glass shard. 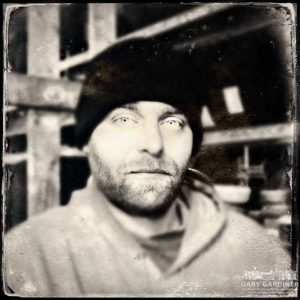 Two days later at the end of the day just before sunset while unloading my gear from the car after a day of travel I hear a high pressure hissing sound reverberating through the garage. I step away from the car to better determine where the sound is coming from to see a larger than a tennis ball sized bubble expanding on the sidewall of the right rear tire. The leak is slow enough that I can get my wife from upstairs to witness the fourth flat in five days. All in the garage while the car is sitting still.

That’s the good news. Everyone was safe and changing tires in the garage.

Then bad news was the tire needed to be replaced which brings me to the portrait of  the tire repairman.

Shot it with a D300 and an 85mm f1.8 lens as he stood in the open doorway of the repair shop after replacing my tire. I also shot him with the Hipstamtic Tintype app.