Skateboarder enjoys afternoon with friends – My Final Photo for April 30, 2013

Earlier I watched a conversation on CreativeLive with Joey L and Chase Jarvis who answered a viewer’s question who wondered what they thought was the most disruptive aspect of modern photography.

Jarvis said context was having the most effect on photography echoing a previous CreativeLive conversation with Robert Scoble about technology.

The broad idea is the viewer is no longer interested in just viewing the photo. More people are now able to understand and practice the science aspect of creating photographs and are more interested in the complete context of how the photo was created. 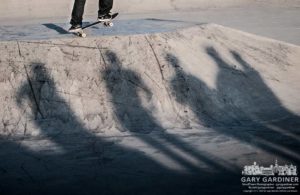 Context expands interest in the photo beyond a visual interpretation. Additional information helps the viewer better understand not only the photograph and its purpose. It also helps the viewer, if a photographer,  to make their work better.

When properly done, context increases a photo’s value with a new set of facts and ideas that contribute to the creative process.

My photo for the day is an example of contextual composition where added elements other than the subject helps tell the story of the moment or creates a better dialogue about the subject.

This skater’s expression and position, without the shadows, are an interesting subject.With a slight crop it would stand as a single frame.

The row of trailing shadows adds context. It shows a group of friends watching  his performance during an afternoon skate session at the local park.

I prefer the top photo because it shows the skateboarder’s joy. The bottom photo is graphically more interesting with the shapes and tones becoming primary to the composition.

Both photos without the contextual shadows would be pleasing and great photos of skateboarder action. Placing the shadows of the friends into the frame adds the element of their observation and group dynamics.

The shadows by themselves are interesting but are not subjects for a photo. Including them as contextual elements elevates an ordinary action photo to a more interesting storytelling photo of an afternoon with friends.