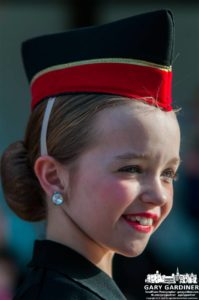 Generations dancer before solo performance – My Final Photo for April 26, 2013

The Fourth Friday in April always begins the once a month summer celebrations in Uptown. I’m almost always there as it continually offers an old news photographer the opportunity for  feature photos.

Feature photos are typically those photos that don’t need an explanation or caption. They speak for themselves not needing anything to help explain the moment.  A caption is only useful only to expand on the obvious and to answer one of the WWWWWH questions.

Feature photos typically have very strong central subjects, good lighting, and are at the peak of action. A combination of these elements intensifies the impact so that the photo usually stands out on the page. It becomes the dominant element on the page around which other stories and ads are scanned or read.

Also called stand-alone photos, good feature photos do not require accompanying stories and usually are all that is necessary to communicate the moment.

Using a feature photo does not always communicate the complexity of an event just as this real-time portrait of a Generations dancer about to perform her solo doesn’t show the depth of Fourth Friday. Fourth Friday is always a lot more than a single dancer. Even the dance portion of the night is more complex than this dancer as the photo below shows.

If I were on assignment to cover Fourth Friday for a publication there would be a shoot list of photos to match the editorial idea for the story. The list details the subject of the story with a suggestion of the photos required. If the story were about dancers both these photos would have been good as feature photos. If it had been about the food vendors neither would have worked. Not that the food vendors couldn’t have a standalone photo. The girl reaching for a sample of strawberry shortcake is a good feature photo for that purpose.

I didn’t shoot every possible event for the night. The cool weather perhaps kept some people at home because the crowd was smaller than normal so there isn’t a crowd photo. I didn’t shoot any of the musical groups. I didn’t shoot people working in the booths.

Those will probably be in the next set of photos on the next Fourth Friday. For this one you’ll have to be satisfied with my standalone feature photos. I was.