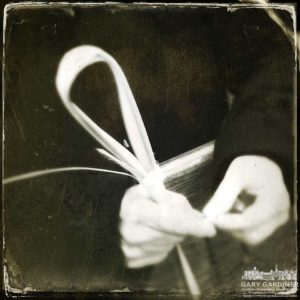 Today was Palm Sunday. It begins Holy week in the church. We missed the early Mass because we overslept waking up five minutes after our normal departure time.

I had forgotten that this Mass has lengthy readings covering nearly a week’s set of events and was slightly confused to arrive for Mass with a full parking lot. Not having attended the later Mass in many years I wasn’t sure if we were arriving to an already full church filled to overflowing with the faithful and a full parking lot with only scattered empty spots remaining.

The truth was that the readings kept the earlier Mass longer than normal, and now the fire lanes were filled with cars waiting until the departure of the previous celebrants.

We eventually parked close to the church filling a space emptied by someone leaving immediately after communion and bearing their selection of yellow and green palm fronds. Thank you for the hurried departure.

My Final Photo for the day is an iPhone Hipstamatic Tintype photo of a parishioner praying the rosary while holding palm fronds.