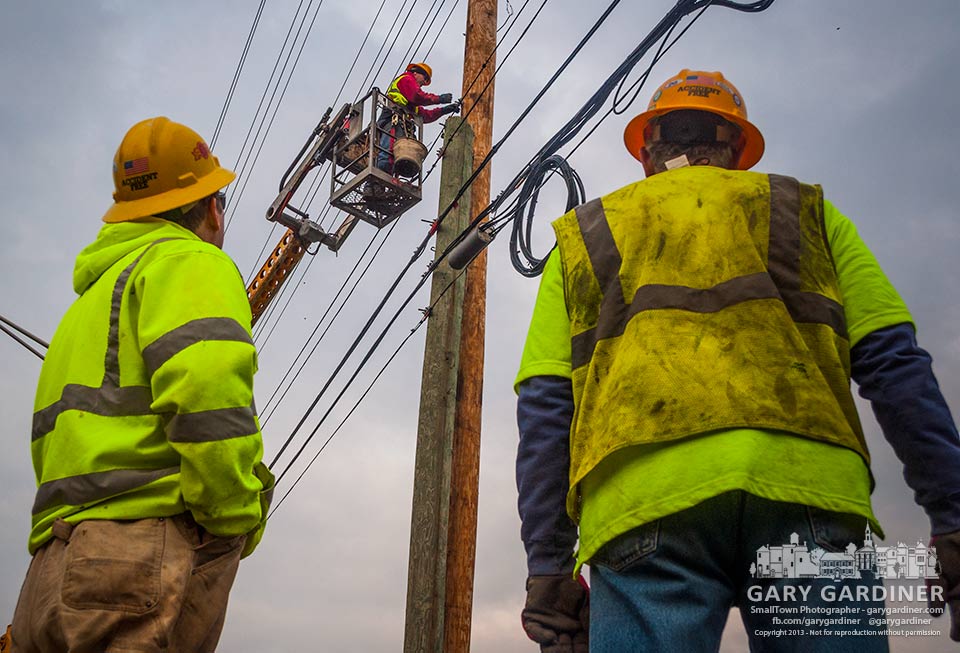 Utility workers move a fiber optic cable to a new pole along Cleveland Avenue as part of the upgrade for expected construction. My Final Photo for Dec. 2, 2013.

Utility worker taking a break
is My Final Photo for May 15, 2013

Spent most of my morning monitoring utility work in and near the easement at the rear of my small plot of Westerville.

The city is upgrading underground power lines and as luck would have it a main transformer box sits at the corner of my much less than an acre piece of the city.

Several years ago the city moved power from overhead poles to an underground network that is insufficient to handle the current load and requires upgrade and redesign. I know it’s not up to what is required as our section of the grid fails many times during the year. Our normally quite cul-de-sac gets even more quiet with air conditioners silent. The neighbors behind me are on a different circuit and remain bright and cheerful. Our corner of the J-shaped grid goes dark throwing  about 25 homes into a world where flashlights and candles light the night and neighbors stand in the street pondering what happened, why again, and when things will return to normal.

I’ve stopped reminding everyone of the 1960 “The Monsters Are Due on Maple Street” Twilight Zone where a neighborhood if thrown into darkness as an alien experiment in human behavior.

Our street has a dynamic set of families and home owners.

Young couples with toddlers, single mother, families with multiple grandchildren, divorcees, homes shared with adult children and their children, a family from the Arab Mideast, creatives, blue-collar workers, nurses and teachers, and owners that quietly keep to themselves with pulled shades, closed garage doors, and labored conversation. Previous neighbors include a mix-race couple, a single male who is rumored to have been the first love of a neighbor’s oldest, a family with a developmentally disabled child, families with “perfect” children, and families with arrest records.

The annual July 4 Rib Cook-Off and cornhole tournament draws nearly 100 from extended families, friends, and college mates. There’s even have a parade down the short street.

Few people sit in their back yards. Most have benches and chairs in front so they can see and talk with one another. An unknown car and driver are scrutinized yet pickers are eagerly greeted the night before Rumpke arrives.

We watch out for each other’s kids. We constantly harass the Pittsburgh sports nut who displays his favorite town’s most current sport’s flags and defends every loss and openly celebrates the victories.

There’s not a problem as father and son temporarily close the street to practice lacrosse tosses.

Everyone warmly greets returning soldiers with the exuberance of patriotism although most have never been in the military.

Births, deaths, graduations, police cars, new cars, and over-productive gardens become a shared experience among the 15 homes on my street.

It’s a great street on which to live. The diversity is complex, exciting, and at times confusing. There are touches of the fear and anger that might emerge in a Rod Serling story. As an observer I’m get excited to live in and witness this neighborhood.